It might be a bit challenging for me to type this post because I may or may not have a broken finger, but I’ll get to that in a bit. Day 2 in Israel started with a 5:45am wake up call, since we had to be downstairs to meet the buses and head to our practice field by 6:10am. Our field wasn’t too far away though, so we got there pretty early.

walking to the field

Unfortunately, the field doesn’t have any field hockey goals or lines, and it’s grass.  I think my experience with club hockey has prepared me more for these kinds of hiccups than the other girls. Even the high school girls are used to turf, which is a far cry from the lumpy baseball outfield we played in at Seneca Valley.  Anyway, I’m fairly used to having to improvise in terms of lines, goals, and field quality so it didn’t bother me but the coaches are looking into getting us some goals.  It’s probably best so the goalies can get some practice in defending an actual field hockey goal instead of the smaller futsal goals we have access to. 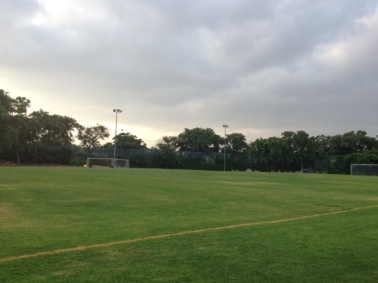 We started off doing some interval runs, during which I felt pretty good, then we hit around for awhile to get used to the field and went into drills.  As usual, my fundamentals were weak but I have a lot of opportunity to work on them.  We ended the practice with some 3v2s, which I usually enjoy, especially on defense. I started the drill on defense and the first time I went out I played alright I thought, but the second time I felt totally lost. There was one play where I thought my fellow defender was going to clear it but she didn’t and then I got stuck kind of flat footed. So when I got another chance to go I was 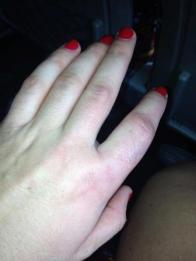 determined to fight like hell for the ball. I succeeded but I went in for a jab while the girl on offense was swinging for a shot and my finger got caught in the middle, and of course I wasn’t wearing my glove at the time.  I’m used to getting hit in the finger and i usually play through it but it started swelling up really badly and much more quickly than I’ve ever experienced before. Also, practice was about over and I figured it would be best to just ice it and see the trainer back at the hotel. Unfortunately, the trainer didn’t have great news. Although she said she doesn’t think it’s broken, she doesn’t really know and unless I want to go to the emergency room, I should just wait to see if it gets better in a few days. She put it in a splint and told me to come back before our afternoon practice to figure out a way I can protect it while I play. The only silver lining in this is that because it happened on the first day I have a lot of time to heal before our games start. Hopefully I will still be able to play while it’s healing. 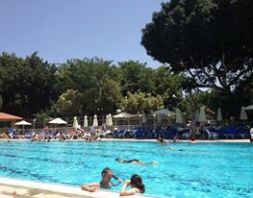 Where we spend our time between games

After we got back from practice we had breakfast and then got to spend some time at the pool before lunch. It felt great to relax and cool off in the pool. Unfortunately I had to keep my hand out of the water because of the splint, so swimming was a bit challenging.  Overall though, not a bad way to spend a day: field hockey in the morning, pool in the afternoon, and more field hockey in the evening. I could get used to this.

My search for a new best friend.